Stavros Mavroudeas is currently Professor of Political Economy at the Department of Social Policy of Panteion University. He was previously Professor of Political Economy at the Department of Economics of the University of Macedonia. He studied at the Economics Department of the National Kapodistriakon University of Athens, from where he received his BA Economics (1985 - First Class Honours). He subsequently studied at the School of Oriental and African Studies, University of London, from where he received his M.Sc. Economics (1986). He received his Ph.D. from Birkbeck College, University of London (1990). He has worked as Lecturer (1992 - 1996), Assistant Professor (1996 - 2002), Associate Professor (2002 – 2013) and Professor (2013 - 2019) in Political Economy at the Department of Economics of the University of Macedonia. His teaching and research fields include: Political Economy, Macroeconomics, History of Economic Thought, Labour Economics, Economic Growth and Development Economics, Greek Economy. He has authored several books in English and in Greek (such as ‘The Limits of Regulation’ – 2012 Edward Elgar, ‘Greek Capitalism in Crisis – Marxist Analyses’ - 2014 Routledge)) and also many chapters in collective volumes. His journal publications include ‘Development and Crisis – The turbulent course of Greek Capitalism’ (International Critical Thought vol.3 no.3 2013)), ‘Regulation Theory: The Road from Creative Marxism to Post-Modern Disintegration’ (Science & Society vol.63 no.3 1999), ‘Periodising Capitalism: Problems and Method - The case of the Regulation Approach’ (Research in Political Economy, vol.17 1999), ‘Work more or work harder? The length and the intensity of work in Marx’s ‘Capital’ (Science & Society, vol.74 no.1 2010), ‘Duration, Intensity and Productivity of Labour and the Distinction between Absolute and Relative Surplus-Value’ (Review of Political Economy, vol.23 no.3 2010), ‘A History of Contemporary Political Economy and Post-Modernism’ (Review of Radical Political Economics vol.38 no.4 2006), ‘All work and no ... pay? Unpaid overtime in Greece: determining factors and theoretical explanations’ (Industrial Relations Journal vol.45 no.1 2014), ‘Is Cartelier’s Monetary Approach a Convincing Alternative to the Labour Theory of Value? A Comment’ (Economic Thought vol.6 no.2, October 2017) etc. He is a founding member of the Greek Association of Political Economy and served in its board as Secretary (2009-13) and President (2018-20). He has participated in many academic conferences as presenter, chair, member of the organizational and/or the scientific committee. He is also member of the editorial board, advisory committee and/or reviewer for several academic journals (Science & Society, Review of Political Economy, Review of Radical Political Economics, International Critical Thought, World Review of Political Economy, Research in Political Economy, Review of Keynesian Economics, Economic Issues, Routledge). He was also visiting researcher in several universities (SOAS, City University London, Kingston University London, University of Siena etc.). He has given many academic lectures in Greece and abroad. 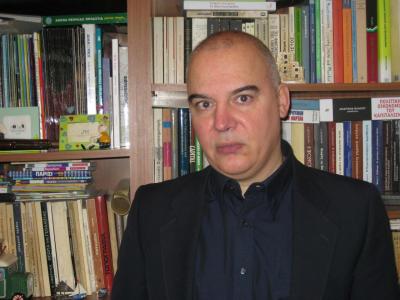